Tip: Serve with a side of peasant bread! Dip bread in a mixture of olive or Avocado oil and Chimichurri green sauce. If Chimichurri sauce can not be found, create your own with basil, garlic paste and lemon pepper. 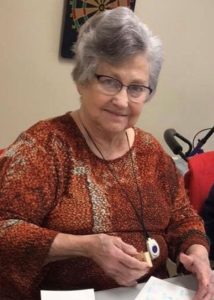 Since Bill and his wife Terry were both born and raised in Louisiana, one of the family favorite recipes has always been shrimp gumbo. The following recipe is out of a traditional Louisiana cookbook, River Road Recipes. Bill and Terry enjoyed making it together and adding their special touches to it. 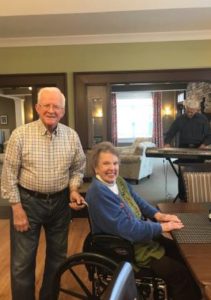 Notes: Make sure your butter, lard and water are well chilled before starting! Use more or less sugar depending on how tart your apples are. Put foil on bottom of oven in case pie leaks, change out tin foil if needed

Wilma was born in Laurel, Mississippi, and was married to Karl, who served for a short period in the Navy. Wilma spent much of her life as a bank receptionist and grew up attending Central Baptist church. She also sports some musical talents – she plays piano and sings, and her favorite type of music is classical. Wilma spends her free time watching TV, reading, and doing arts and crafts. Here at Spring Park, she especially enjoys joy rides, bingo, special events, and our field trips to Furman’s “Music by the Lake.” Wilma joined us on September 1, 2017, and we have loved having her as a resident! 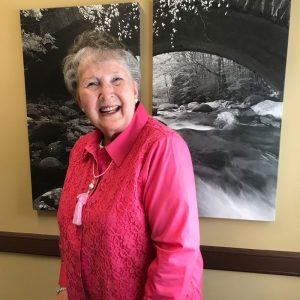 This recipe comes from Oscar, who has been at Spring Park since October 2017. He was married for 69 years to his wife Ruby. They had three children, six grandchildren and 15 great grandchildren. Oscar was in the US Army for three years and is a World War II veteran. One of his most exciting memories is coming home from World War II.

Oscar’s favorite kind of music is piano, country, and gospel. He’s a member of Berea First Baptist Church where he gets to sing his favorite song, How Great Thou Art. He enjoys golfing and reading about history and sports. Some of his best memories are of meeting actress Mae West and receiving a letter from professional golfer, Arnold Palmer. When asked what life advice he would like to impart, Oscar said to “treat everyone equally.” Thank you for this special recipe, Oscar! 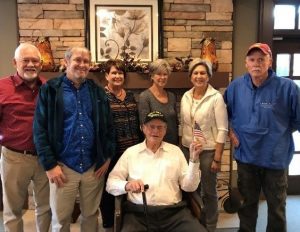