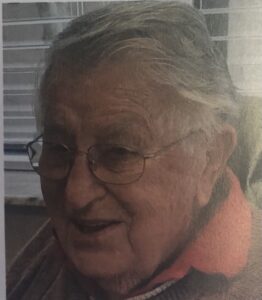 Mr. Ed Dionne has only been at the community for a little over 2 months. He was born in Nashua, New Hampshire and is the second oldest out of six siblings. Ed has a musical side and played the saxophone and clarinet in his high school and college bands. He has quite an extensive education as well, which was provided by the US Navy.

Ed attended Dartmouth College and was a “special” fighter pilot. He also attended the Rensselaer Polytechnic Institute in Troy, New York, and the University of North Carolina. He started flying at Bunker Hill, a town in Pipe Creek Township, in Indiana and ended up at the Pensacola Florida Navy Base flying a two-wing, open cockpit Stearman. He remained stateside through World War II.

After the Navy, Ed married Aurore. During their happy 72 years of marriage, they had two wonderful sons who are now retired. He spent nine years studying printing, and at 34 returned to the University of New Hampshire for three years to study electrical engineering. Upon returning to Nashua, IBM in New York made him an offer.

Ed  had lived in Lake Alfred since 1988, and he loved to play golf.  He also bought a summer camp, that he was able to eventually turn into a residence. Today, on most days you can find him working on a puzzle, playing Bingo or Pokeno. We are blessed to have him a part of our Lake Howard Heights family!